CompositionalLayoutDSL is a Swift library. It makes easier to create compositional layout for collection view.

An online documentation can be found here.

To see some usage of this library you can look to:

To integrate CompositionalLayoutDSL into your Xcode project using CocoaPods, specify it in your Podfile:

To integrate CompositionalLayoutDSL into your Xcode project using Carthage, specify it in your Cartfile:

CompositionalLayoutDSL can be installed as a Swift Package with Xcode 11 or higher. To install it, add a package using Xcode or a dependency to your Package.swift file:

Here some explanation of how this library work, it can be divided in 3 parts: the role of the core blocks, how does the modifiers works, and how the conversion to the UIKit world is handled

This library contains all the core structs for creating a compositional layout, here the exhaustive list:

Each of those building blocks conforms to their respective public protocol and handle the immutable properties of their associated UIKit object.

Those immutable properties can only be changed on those core structs, and are not available globally on LayoutSupplementaryItem. This is the same for all core structs.

Mutable properties of the UIKit objects are handled by the extension of the Layout... protocols. Here some example: contentInset(_:), edgeSpacing(_:), zIndex(_:), interItemSpacing(_:), scrollDirection(_:). Changing those mutable values are done with modifiers, which are internal struct (e.g. ValueModifiedLayoutItem). As those methods provided through extension of the Layout... protocol, their are available for custom elements outside the library.

Something to note is once you applied a modifier for mutable properties you no longer have an Item, but you have a LayoutItem, so changing immutable values will not be possible afterward.

Finally once we have combined the core structs and the modifiers, the last step is the conversion of the Layout... to the UIKit world. This is done with builders, they all work in a similar way. As an example here how ItemBuilder works:

This means that only internal struct can be converted to a UIKit object, if you try to define a custom LayoutItem and write var layoutItem: LayoutItem { self } like it is done internally, it will cause an infinite loop inside the ItemBuilder.

User of the library needs to base their custom layout on core structs provided by this library.

CompositionalLayoutDSL is available under the MIT license. See the LICENSE file for more info.

TinyConstraints is the syntactic sugar that makes Auto Layout sweeter for human use.

TinyConstraints is the syntactic sugar that makes Auto Layout sweeter for human use. Features Pure Swift 5 sweetness. Everything you can do with Auto 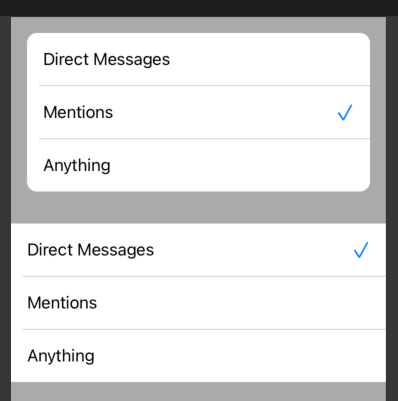 Apple provides us two ways to use UIKit views in SwiftUI

RepresentableKit Apple provides us two ways to use UIKit views in SwiftUI: UIVie 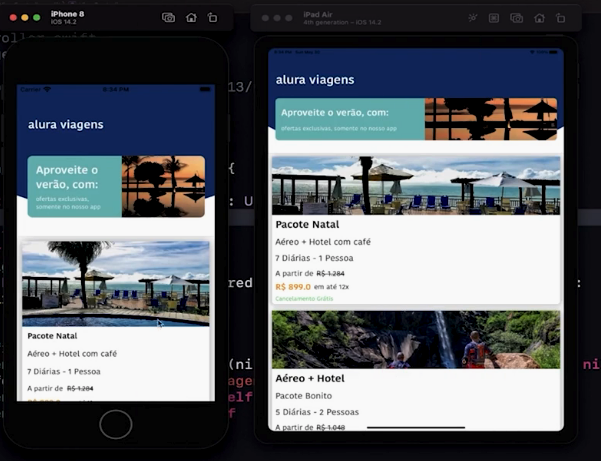 A collection of operators and utilities that simplify iOS layout code.

Anchorage A lightweight collection of intuitive operators and utilities that simplify Auto Layout code. Anchorage is built directly on top of the NSLa

A simple integrated version of iOS 13 Compositional Layout, modified into a way similar to Functional Programming to generate UICollectionViewCompositionalLayout.

WWCompositionalLayout A simple integrated version of iOS 13 Compositional Layout, modified into a way similar to Functional Programming to generate UI

A project for studying of UICollectionViewCompositionalLayout

An easier and faster way to code Autolayout

EZAnchor 中文介绍 An easier way to code Autolayout Are you annoyed of coding .active = true while using Autolayout Anchors over and over again? Are you an

SuperLayout is a Swift library that makes using Auto Layout a breeze.

SuperLayout is a library that adds a few custom operators to Swift that makes using the amazing NSLayoutAnchor API for Auto Layout a breeze. SuperLayo 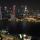 Using the UIKitChain framework, You can create a UIKit component in one line of code.

Using the UIKitChain framework, You can create a UIKit component in one line of code. Installation CocoaPods CocoaPods is a dependency manager for Coc

ModestProposal 2.0 Makes building HTTP URLs and requests easy. Can be used with any networking library that accepts NSURLRequest as a parameter. Featu